The June meeting was attended by 16 members

During the first half of the meeting the following was discussed..

Details were discussed regarding the preparation for the Rare and specialist show and Seminar. All was in hand with no significant problems to report. Members are asked to attend the hall around

Details were discussed regarding the preparation for the Open Show. The Show schedule will be finalised in the next few days and will be ready to hand out at the Rare show   with no significant problems to report

Sandra Holden then gave her presentation on Show preparation. This was well received from all from beginners to the champions. There was a lively discussion afterwards.

Below are the notes kindly reproduced by Sandra

Firstly I believe that if you notice a promising youngster whilst it is in nest feather, then its preparation begins there.

When a youngster has completed its first moult you will notice that the main throat spots are bigger than before that moult. So my little trick was to pull those spots out while the bird is very young – then they would grow back larger and THEN when the juvenile moult takes place the throat spots will have gone up by two sizes so to speak.

Everyone’s different and it depends on time etc. But I used to select my show team at least FOUR WEEKS prior to the first show, and place them in as long a stock cage as possible. I.e. 3-4 cages in length.

I segregated the cock from the hens to minimise fighting. Also I found that the cocks would pair up to a mate in this time. So I didn’t have an odd number, again for the fear of fighting. Even if it meant that I was preparing a bird that wasn’t going to be entered.

These were taken two at a time (each two friends) in an old show cage that had holes drilled in the bottom, outside and hung on a hook and sprayed with tepid water until soaked. Then returned to their cages and the next pair were sprayed in the same manner. This would go on until all my team had been sprayed. This I did daily. As the days went by the birds would become more conditioned and their feathers no longer retain the water. The birds had built up a waterproof barrier. This is when they are fully conditioned. I often turned the cage slowly upside down to tip the water out as this would also steady the birds.

So again why shampoo?

Well my granddaughter asked me this very question when she was about nine or ten years old. And I told her this:

2Take a look at my birds very closely as if taking a photograph and remember what is in front of you. Now be an angel and go back to the house and watch your video and I’ll join you as soon as I can”

When I’d finished shampooing all my birds, I joined her until about an hour had passed. On returning to the birdroom I asked her to keep her eyes closed until I had positioned her in front of them. I said “now keep you eyes closed and remember what they looked like before I washed them. Now open your eyes and tell me what you see”

The reply was with wide eyes “they’ve got big heads” and I explained that it was just the same as when your hair needs washing and it looks all flat and lank, but after you’ve shampooed it, it looks all fluffy. “Oh! She said now I know why you spend so much time up here – to make sure you win some rosettes for me” Bless her.

Those birds which had mainly yellow or white feathering such as the Pieds or Spangles then had white paper on the cage floor to help keep them clean. This I used to buy from a chip shop.

NEVER wash a bird directly after you have de-spotted it, as the feathers will be loose and you may lose the very ones you need. I used to de-spot a few feathers each day in the week leading up to the show and shampoo on the Friday evening if possible so there was time for feathers to settle.

Why go to all this work and not show a bird in the cage it deserves.

The show cage is your preparation stage.

If it is chipped – touch it up with a felt tip pen or repaint it.

If the interior is stained dirty or yellowed, again wash it or repaint it.

Because if two birds are up before the judge and he’s really undecided which should win, he will then look at the cage and presentation to choose the best presented bird and cage on that day.

BECAUSE IT SHOWS THAT YOU CARE.

TWEEZERS – LARGE AND FLAT, I used to use my finger nails as I found that using tweezers often broke the feather! 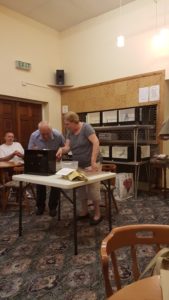 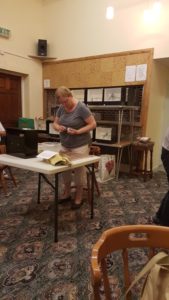 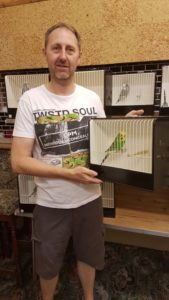 Dave with his winning Bird 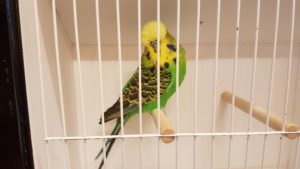 Audio file of first half of meeting